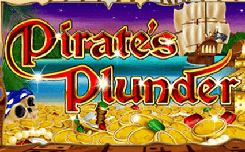 The developers of the company Habanero, released an interesting video slot Pirate’s Plunder, for those who like the pirate theme.

The symbolism of the slot, fully corresponds to the pirate theme. On the screen you can see: helm, compass, map, anchor, pirate flag and ship, parrot and other symbols.

Wild – this pirate, can appear on the screen vertical stacks, is able to replace, simple symbols, to complete the winning combination.

The bonus features in Pirate’s Plunder are presented in two versions:

Pirate flag – appearing anywhere on the playing drums, is paid, and if fall out from three such symbols, it starts 12 free spins. All winnings during these free spins will be multiplied by x3.

The treasure chest is also an activator of free spins. With the appearance of three such symbols, you will become the owner of 10 free spins, in which the multiplier X3 also acts.