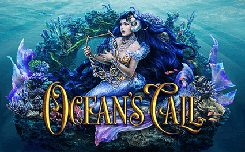 A magnificent gaming machine about mermaids and other mythical inhabitants of the sea depths was released by Habanero.

In the video slot “Call of the Ocean” five reels with pictures, on the screen there are fifteen cells for symbols. You will see several mermaids, a beautiful navigator in a tunic, an ancient map and an old crown. Characters occupy three cells on drums, so any of them can fill the whole column.

Game Ocean’s Call has several interesting features, including different types of characters, free spins, a game for doubling and other features.

Wild (the evil mermaid) is absent on the first drum, which prevents him from forming chains himself. But it can replace in combinations other symbols, except for the scatterers.

Scatter (necklace) brings payouts regardless of location. The amounts are calculated at the general rate. At least three scatterers, activates free spin.

Scatter (anchor) appears only during free spins and prolongs them.

Free Games – Ten free spins, they appear on the screen anchors. Three such symbols give the right to three more spins. They can be renewed several times.