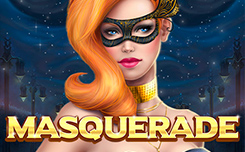 The Masquerade video slot is a beautiful model with an unusual design, original features of several characters and other interesting features.

In the “Masquerade” gaming machine there are five drums and twenty fixed lines. Columns differ in the number of characters: in the middle – four, in the second and fourth – three, in 1 and 5 – two.

A set of gameplay functions consists of nine basic pictures and two special characters in the form of masks.

In the columns of Masquerade, card denominations, a cylinder, a watch on a chain, a ring and a red-haired girl in a mask drop out. All the pictures are represented on the reels with vertical stripes.

Also in the game are two types of masks. They are also represented by long strips in columns.

Golden Masque – Appearing on the screen, the golden masks turn into identical symbols. The pictures are randomly selected. These icons can be duplicated on adjacent drums.