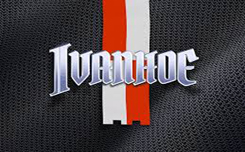 Slot Ivanhoe, has 3 reels and 17 paylines. Among the symbols depicted on the drums, you will meet cherries, watermelon, lemon, sevens and others, but the special symbol in the game is one.

Bonus (logo) – if three such symbols appear on the active line, the bonus game will start.

Bonus (crown) – Pictured on the middle drum. In ordinary spins, it appears on the screen, but is not used. In free spins it becomes a wild.

Bonus Game – Initially, the client is assigned five free spins. Four additional levels are available. For a new stage, the player is transferred if he gets the required number of points on the amount of payments. Each next level means three more spins with additional coefficients x3, x4, x5 and x6.

Ivanhoe gambling machine turned out to be unusual in all respects: in terms of gameplay, in design and even in terms of functionality. Whether he succeeds in winning the hearts of casino customers, time will tell.