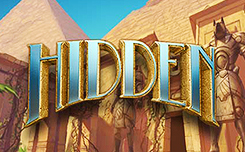 Slot Hidden will introduce the players to Professor Taylor and his nephew Benjamin, who went on an exotic journey in search of the lost treasures of Ancient Egypt.

The advantage of the game is considered to be a large number of lines on which to constitute combinations. As symbols, portraits of heroes, camels, sphinx, denominations of cards, as well as wild and scatter are used.

Respin – activated randomly, during the main game and allows you to play 3 repetitions. During this game, on the screen of the slot, vertical Sticky Wild will be added, which can fill up to 3 reels.

Free spin – activated if on the reels, there are three symbols of the scatter. After that, a round of free of five free spins starts. Before the beginning, which will start the function expanding symbol – random selection of one of the symbols, which will expand to 2×2 cells once in each spin.