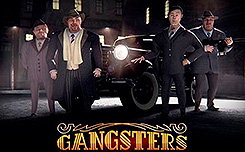 A well-known provider of software for online casinos Habanero has released a new slot Gangsters. The new development is made in a gangster theme and sends players in the 20s in the US.

The Gangsters slot has a playing field consisting of 5 reels and 25 paylines, on which symbols appear and are added to winning combinations. Among the symbols that can fall on the coils of the slot – 5 gangster characters, which can bring the user the largest winnings.

The development received one standard bonus symbol – Wild, which, when dropped out on the reels, replaces the other ones, if thanks to this substitution additional winning combinations are formed on the playing field.

Also in the functionality of the slot is a Scatter symbol – a newspaper with a thematic title Who Did It ?. If this symbol falls out in more than three pieces, the game starts a round of free spins.

Along with standard bonus symbols, the Gangsters slot has received a special bonus round in which users can win large cash prizes. The essence of the round consists in the following: on the screen there are closed safes, and the user needs to open them one at a time to get money.