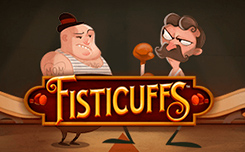 Company NetEnt, has released a video slot Fisticuffs dedicated to fistfight. The slot will please you with a very large number of combinations, which here are formed from two sides, various special symbols and other options.

The Fisticuffs slot is equipped with five reels and has 10 paylines. Among the symbols can be found: different elements of the equipment of fighters. The video slot Fisticuffs has unique functions, repeated backs and several kinds of Wild.

Wild appears on all the drums, and on the first and fifth he goes in strips. It is able to replace other conventional pictures, if there is such a need.

Straight Wild (thick in a hat) drops out only on the third reel and also replaces other images.

Diagonal Wild (thin with a mustache) is only on the second and fourth drums. It also serves to replace other characters.

Two different Wilds, appearing on nearby drums, activate the Boxing Feature. This function can be manifested in two ways, but it necessarily entitles one repeated spin.

If one or two Diagonal Wilds are on the same line as Straight Wild, the fat man throws the thin boxer onto the first or fifth drum. The symbols that appear between them also become Wild.

If one or two Diagonal Wild falls diagonally from Straight Wild, the lean fighter beats the fat man turning the picture over or under him into another Wild. All Wilds remain in their places during the re-spin.