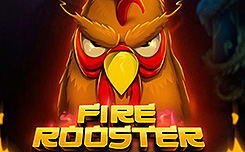 As everyone knows, according to the Chinese calendar, 2017 is the year of rooster, and this is the theme chosen by the company for its new slot. Fire Rooster is one of many slots, the themes of which are based on the stunning Chinese legends, and based on a wonderful legend, the fiery cock, which fearlessly fought with fire-breathing dragons and mystical creatures.

The new video slot has five reels and 243 winning lines. A wild symbol that replaces any other symbol is the Fire Rooster. In the game there is also a function of free launches where, when a crown of a rooster falls out, the player can get up to 28 free spins, and the fallen rooster symbol, during the bonus game, may explode and add a few more wields, and thereby significantly increase your chances of a large winning. There are also three progressive jackpots in the game, which are activated in random order.