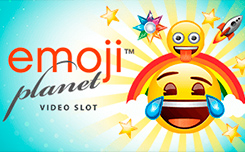 Emoji Planet – a new slot, from the world leader of the company NetEnt. The new game will surprise you with an unusual structure, because the game screen has a very unusual 5×6 grid. The game has 6 additional bonus features.

Also, pay attention to the right side of the screen, it contains the following symbols: Bombs, pizza, kisses, rockets and two hearts, if the winning combination coincides with the use of one of these symbols, they are filled and activate an additional bonus function.

The bomb function – eight random characters are destroyed, and a random cash prize, will increase your winning combination several times.

Pizza Function – A 3 × 3 square will appear anywhere in the playing field, and a randomly selected character will fill this field and bring a guaranteed prize.

Kiss Mark function – three randomly placed wild symbols appear on the game screen, each of them can replace any symbol of the slot three times, after three matches the symbol disappears, but the game continues until the first loss.

A missile feature – one of the game reels completely disappears, and one or more wild symbols appear at the top of it, if the winning combination removes one upper cell on the right or left, another wild symbol appears, the game continues until the first loss.

The Two Hearts function – when activated, you get an additional multiplier at the next winning combination, the more characters on the game screen, the higher the multiplier.