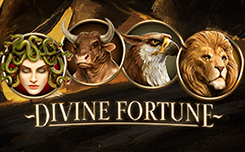 The Divine Fortune slot is equipped with five reels and has 20 lines for forming a combination. In this game there are, common symbols: Gorgon, minotaur, griffin, and names of playing cards and special symbols: wild and scatter, free spins, repeated starts and jackpots.

Wild (white horse) is able to replace common symbols in combinations, and also is involved in several bonus options.

Scatter (Zeus’s hand with lightning), with the appearance of at least three such symbols, starts, 5, 8, 12 free spins. Here all the Wilds turn Wild on Wild and fill the whole column

Bonus (a gold coin with Pegasus) is necessary for the beginning of a thematic bonus, in which you can compete for jackpots and prize payments.

Falling Wilds Re-Spins – starts, if wild, appears on the screen, during which it descends to one cell in the column.

Wild on Wild – if it appears, on top of the wild, this symbol stretches all three cells vertically. Further, the resulting chain will descend according to the rules of repeated spins.

Jackpot Bonus – In the process of the game, gold coins are accumulated, dropping out in any cells. When there are at least three of them, a prize draw will begin on the additional screen. There will appear a sign with fifteen cells. Available coins are distributed on them in a random order. Then there will be backs, in which additional coins may fall out on free positions. The number of rotations depends on the collected coins. Each such element brings a payment that reaches two hundred bets. Here you can win jackpots.

A well-known software developer released a wonderful device with great bonuses, big jackpots and unique prizes. Also, the game is entertaining, convenient and quite profitable.