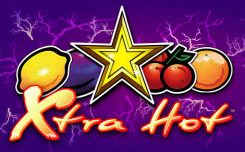 Company Novomatic, prepared a real surprise for all fans of the classics – one of the very first slot machines called Xtra Hot.

The game slot has five reels and the same number of lines with a classic set of symbols depicting various fruits and other standard pictures. When composing winning combinations, symbols are complemented by beautiful animation.

In the game there is a special scattered symbol, and at your service a risk game with which you can try to double your winnings. The success of this action is determined by the probability of 50 to 50 and depends on your luck.

The Xtra Hot video slot is an example of one of the earliest models of the one-armed bandit Gaminator series, which is known to us since the time of the gaming halls. That’s why so many users choose it: they trust him as an old friend.

Simple control of the game with just a few buttons, colorful game symbols, supplemented by animation and soundtracks, which brings us back to the past, harmoniously combined with fairly large payments.