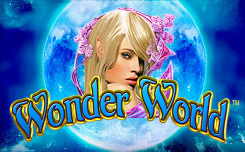 Developers of the company novomatic, released a slot on a fairy tale theme, called Wonder World. During the game, you will find yourself in a magical land, in which fabulous characters, fairies, unicorns, and others live.

Wonder World, is equipped with five reels and 5 paylines. In the game there are, simple symbols: fairy, unicorn and colorful names of playing cards and special symbols: wild, scatter. And also an additional factor and free spin.

Wild not only can form combinations by itself. It is also capable of replacing other symbols, except scatter.

Scatter is paid regardless of the location on the screen. Winnings on it are calculated based on the total bet on the round.

Free Spins – with the appearance of at least three sword images, ten free spins begin. Before starting the rotation, you must select one of the swords to find out what the multiplier will be x2 or x3.

This model is similar to a lot of other Novomatic machines that inhabit fairy-tale characters. It offers well-known to everyone familiar functions, a standard interface and even typical sizes of multipliers.