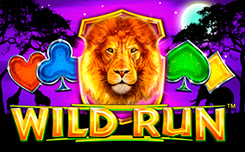 The new video slot that NextGen Gaming has provided is called In the wild run slot. It is equipped with five reels and has 243 ways to generate winnings.

The symbols that you can see on the reels look like four card suits, an elephant, a rhinoceros, a buffalo and a leopard.

Wild – a symbol with the image of a lion, serves to replace simple images, composes combinations from left to right.

On-a-roll is included when any win is calculated. It is a free rotation with bonuses and consists of three starts:

re-spin- extra wild appear on the first and fifth reels. They double the winnings by combinations.

Re-spin – more wilds occur on all drums (except the third). They triple the coefficients.

Free spin – during bonus spins, payouts increase fivefold if combinations are formed with the participation of wilds. They last up to four rotations without payouts.