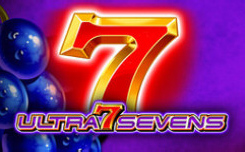 Novomatic company continues to produce a variety of online versions of the so-called fruit machines, that is, slot machines, on the screen which depict all sorts of fruits and berries.

Another such model in the portfolio of the well-known casino software manufacturer was the video slot “Ultra-Seven”.

Ultra Sevens has five drums, forty lines for forming paid combinations and twenty pictures on the main screen. You can use any number of available lines. Ultra Sevens uses the usual character set for “fruit machines”.

In Ultra Sevens, a progressive jackpot is played, represented by three levels, which differ in size. Fight for him at any rate, but it depends on the amount you can claim.

To win the biggest jackpot, you need to collect on screen twenty-seven.

The screen, fully occupied by plums or watermelons, gives the second largest jackpot.

The smallest of the accumulated sums is received by the player who collected twenty any other pictures.