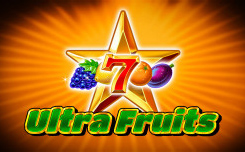 Slots without active lines are not uncommon, but you do not often find models in which all images act like scatters. Such a game is Novomatic’s Ultra Fruits.

Fifteen drums in the Ultra-Fruit gaming machine. On each of them you can see one picture at the same time. Thus, fifteen characters appear on the main screen at once.

On the drums of the video slot Ultra Fruits appear berries, fruits, bells, BAR and other symbols, long used in gambling of this type.

Scatter (the star) forms combinations, like all other pictures, and also launches the free spins, when three, four or five such elements are somewhere on the screen. It falls only on five middle drums.

Free Spins – During ten starts the game is played on the money of the casino. The bet remains unchanged until the end of the round. Bonus pictures “stick” on the screen until the completion of the free spins.