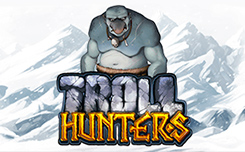 The game machine Troll Hunter from the manufacturer Play`n Go is one of the most unusual devices. Video clip at the beginning of the game will show three formidable northern warriors and a huge troll, to which they will lead the hunt. Superb 3D graphics and original soundtrack will not leave indifferent any players.

Combinations in the device Troll Hunter fall and horizontally and vertically, in addition, after winning, they disappear. After that, new images appear on their place, which are on top, thus giving an additional opportunity for the combinations to coincide. The number of vertical rows on the reels is five, the drums are also five, then the winning combinations can coincide both vertically and horizontally, being anywhere in the row – left, right or middle.

The most expensive character in Troll Hunters is a blond girl. It is also in the bonus game, in which there are already other principles of drop-outs, for 10 characters on the screen you can get an increase in the rate of 175 times, and for a minimum of 5 characters – five times

Wild symbol in Troll Hunter – an icon with three pyramids. It appears in the middle of any fallen combination. If there is a possibility of two or more combinations falling out, the machine will choose the most expensive one.

The bonus round will drop out if the vertical row is completely cleared from the symbols, with a bonus sign.