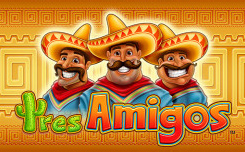 In the Tres Amigos slot, you’ll meet three cheerful Mexicans who arrange a bright fiesta on 5 reels with 20 lines.

In the Tres Amigos slot, you need to form combinations from the left edge, including up to 5 identical characters.

A pod of chili peppers serves as a wild food and improves the result by substituting any image, except for the scatter. A sсatter in the form of a sombrero activates 10 free spins if it appears on the first, third and fifth drum in the number of three, four or five pieces.

In all free spins a 2-fold multiplier operates. Instead of the sombrero, three types of Mexicans are involved, who are responsible for the following bonuses:

Mexican on 5 reels: multiplying the multiplier by one unit.