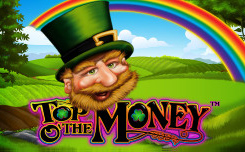 The Top o’the Money slot is equipped with 20 lines on 5 reels. The game revives the Irish legend, in which a creature called Leprechaun hides a pot full of gold at the end of the rainbow.

In the Top o’the Money slot, the pictures do not rotate, but fall down, gradually filling the space of the reels. After paying for the combinations, the prize symbols are lost and new elements are lowered in their place.

Your task in the Top o’the Money slot is to form chains from the left edge of the lines, including up to 5 identical symbols.

The cloverleaf serves as a wild. It replaces all images and helps to improve the result.

Colossal-Reel can switch on at the beginning of any spin. Instead of five familiar columns, a single drum appears on the screen and scrolls several times. Each stop brings a certain multiplier. At the end of the round, all the multipliers are summed up, after which the winnings are sent to the balance.

When the prize combination falls over the reels, the arrow lights up. Next comes the Freefall bonus. If you win it four times in a row and more, the free spins start. The specific number of rotations depends on the number of spins earned in the standard game (5, 7 or 10). In free spins there are 5 additional wilds, and the chances of success are raised to the maximum.