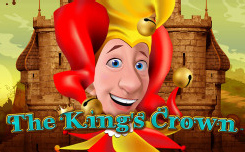 In this game from the developers of Novomatic all is very clear: you have to rule the drums. The only question is, who will take care of other subjects, when, for example, you will be collecting profits?

For such cases, the slot of The King’s Crown has a smart crown that will choose a worthy successor for the time of your absence! In other words, while the next candidate will be crowned, you can easily win royal sums.

To achieve impressive results in the slot of The King’s Crown, you will need to compose from the left edge of the lines a continuous chain, including up to 5 identical symbols.

The main assistant in the game will be a jester. He serves as a wild and is able to replace any character, except for the scatter. The crown serves as a scatter and a wild one at the same time. It appears only on the third drum. In addition, with each drop of the crown from one to three randomly selected images are also endowed with regalia. All crowned pictures have the function of replacing other symbols and increase the chances of success.