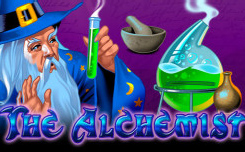 If we believe historians, alchemy, appeared in antiquity, the main goal of all alchemists was to search for a philosopher’s stone that could turn any metals into gold or silver. The slot of the alchemist, from the company novomatic, is dedicated to these scientists.

The alchemist is equipped with five reels and has 20 paylines. Despite the fact that the slot is dedicated to alchemy, the main character is more like a wizard, also in the game you will meet a dragon, an owl of a flask with potions and other similar pictures.

A special character in the main game is one – a magic book combining the possibilities of wild and scatter. It replaces other symbols, and also forms combinations, regardless of the location on the screen.

At least three such symbols, activate 10, 12 or 15 free spins. During these rounds, a golden symbol may appear on the screen, which expands to the entire drum.

In comparison with other slots from Novomatic, The Alchemist makes a good impression. He can not boast of stunning graphics, but some features of the gameplay seem very exciting.