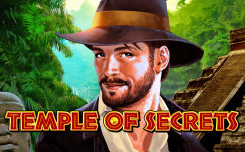 Slots dedicated to the brave travelers who are looking for treasure are at the majority of developers. Novomatic has at least a dozen such games, but it continues to produce them, as they are in demand among users. So they released another slot on this subject, called Temple of Secrets.

Video slot Temple of Secrets, has five reels and 50 paylines. The game has many different options: ordinary and special characters, free spins, multipliers and others.

On the reels of the game you will find a pyramid, precious stones, statues, wild animals, names of playing cards, as well as special symbols.

Wild (the protagonist) himself forms chains, helps to make winning sequences from other pictures and participates in the jackpot.

Scatter (golden scroll), with the appearance of at least three such symbols, free spins are launched.

Free Games – You will participate in ten free spins. In them, combinations are formed more often. Prize starts can be extended by three or more scatters. In such cases, additional multipliers are activated, increasing by one with each start of the bonus spins.

The machine gives the opportunity to fight for the jackpot when playing at any bet. To get it, you need to fill the entire screen with Wild symbols. Ten levels of the progressive jackpot are presented, depending on the accumulated multiplier.

Although the theme of the game can not be called original, the slot attracts the possibilities of gameplay. Different kinds of pictures, interesting free spins, tempting jackpots – all this makes the gameplay interesting.