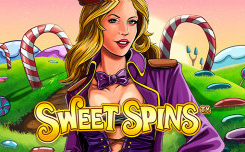 Developers Novomatic, released an interesting slot, called Sweet Spins, which will appeal to fans of sweets.

In the slot, there are 5 reels and 25 paylines. The game features simple and special characters, free spins, and a risk game. Among the symbols depicted in the game, you will meet: ice cream, sugar candies, gelatinous bears, and the names of playing cards from J to A.

Of course, there are special symbols in the slot:

Wild itself brings payouts, forming combinations according to standard rules, and also, if necessary, substitutes the missing elements in the chains from other pictures, except for the scatters.

Scatter are paid, appearing on the screen in any position. Three, four or five scatters launch 5, 10 or 25 free spins. In addition, during these spins, additional Wild symbols involved in the formation of combinations will appear.

Despite the fact that the game does not have original features, this did not stop the developers from making it bright, interesting, and “tasty.” Especially you will be happy if you are lucky enough to become a participant in the free spins.