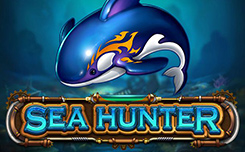 The company Play’n GO has not stayed away from the reviving interest in traditional slot machines. In December, she introduced the model Sea Hunter, sustained in the genre of Steam Punk. You have to go to the underwater hunting, where your prey will be numerous payments and unexpected bonuses.

In Sea Hunter there are three drums, nine cells for symbols on the screen and five fixed lines. In addition to the eight standard icons, the Sea Hunter uses a wild and a four-level system with bonuses.

In the columns of the video slot appear inhabitants of the sea depths: fish, turtles, octopuses, killer whales and jellyfish.

Wild (deep-water mine) falls on all drums and forms combinations independently. It also replaces other pictures in winning sequences.

There are guns on either side of the drums. They have a scoreboard with scales on each. When forming any combination, one division is filled. When control points are reached, the prize drawings begin.

1 – Growth Gun – The cannon shoots all the pictures of one type, changing them to the next in order more valuable symbols.

2 – Sticky Shot – The guns fire shots on items of the same species. These icons and Wilds “stick” on the screen, after which free respines begin.

3 – Wild Warhead – As a result of shots appear from one to three additional wilds.

4 – Multiply Mortar – There is an explosion that guarantees a payout that reaches fifteen general bets.

A multi-level system of bonuses that start with the formation of combinations, distinguishes Sea Hunter from classic gaming devices. Wild, also not used in traditional models. So it can be interesting to fans of multifunctional video slots, as well as conservative players.