Rise Of Olympus – a new slot with a divine theme from the company Play’N Go. 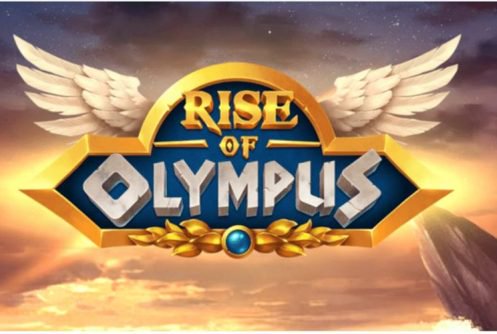 Many players, having opened the rise of olympus slot, will recognize in it the popular slot of the Moon Princess of Play’N Go. And it really is, the game has an absolutely identical structure with a grid of 5×5 characters and a function for removing winning symbols. Also, the game does not have the usual winning lines, combinations are formed at right angles when three identical symbols coincide. The functions in the new game completely coincide with the moon princess slot, with the exception of titles, instead of The Girl Power, the bonus has the name God’s hand and starts when the special counter is filled in the right part of the game screen. During the free spin function, you can get up to 20 free spins with an additional multiplier of winning combinations. 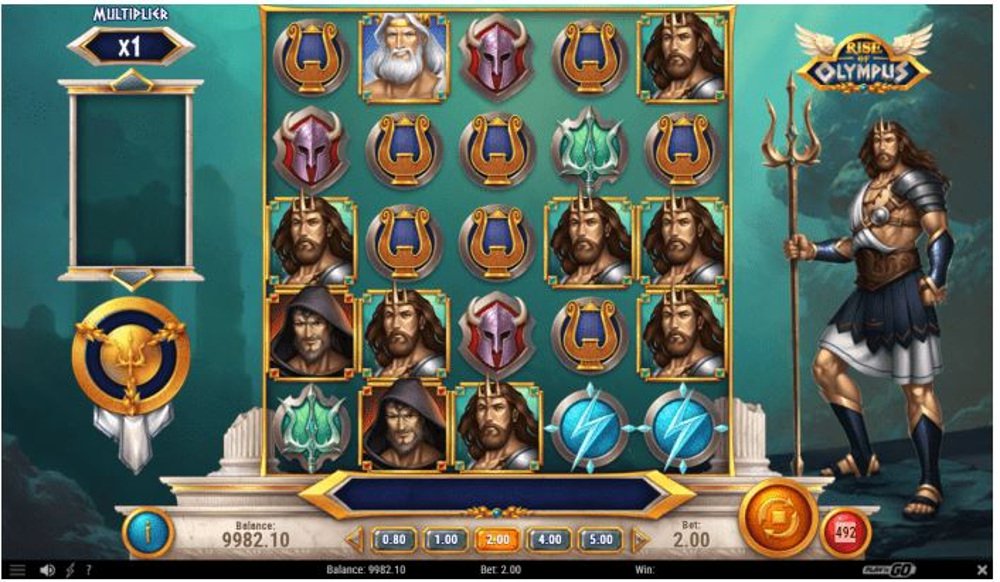 The design of the Rise of olympus slot has received great changes, but only from the graphic side. Actions moved to the village of Greece to the legendary Mount Olympus, where according to legend lived the all-powerful gods Zeus, Hades, Poseidon and others. On the playing drums you will see the symbols of mighty gods, as well as the symbols of their lightning elements, the staff of the aide, the trident and the battle helmet.

Functions of the slot Rise Of Olympus.

Wild symbols in the new game appear when the winning combinations coincide with three identical symbols, the central symbol turns into a wild one and stays on the screen until a higher combination matches the wild symbol. 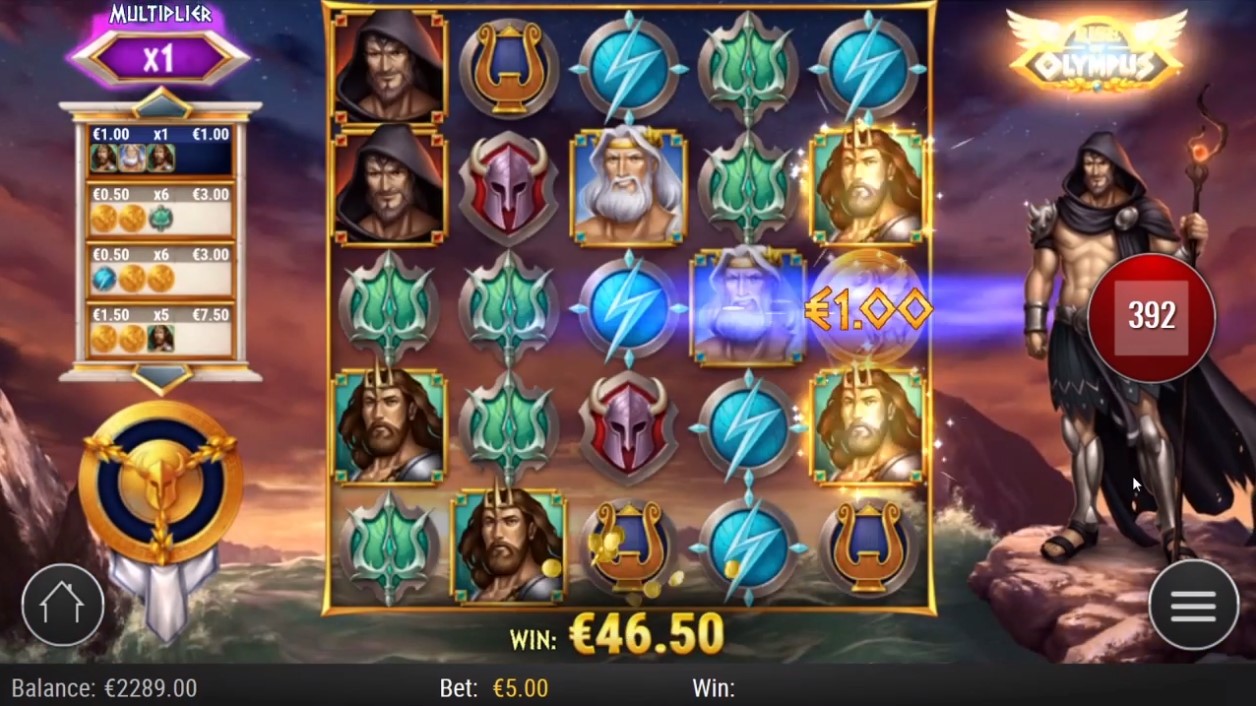 In the new slot each god carries his own unique function. Hades – selects one of the symbols present and replaces it on the entire game screen. Poseidon – adds up to 2 x wild characters anywhere on the game screen. Zeus – in a random order, removes a certain kind of characters.

Free spin function is started when the characters are completely deleted from the game screen (wild exception). Next, you need to make a choice which function will be active during free spins. AID selection – 4 free spins. The choice of poseidon is 5 spins. Select Zeus – 8 free spins. During activation of each mode you will have a chance to get a huge multiplier up to 20x from the winning combination. 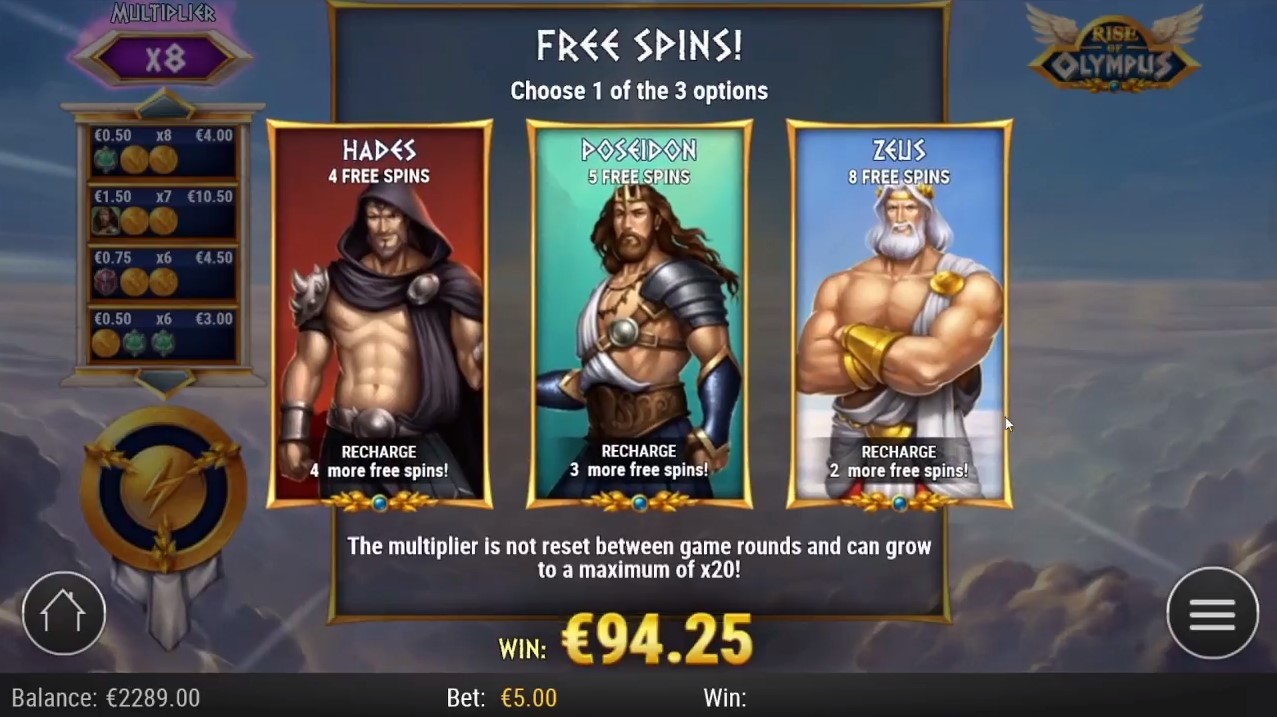 Conclusion. From the review, we can say that Rise Of Olympus is a remake of the cult slots moon princess from the company Play’N Go with updated graphics and a higher dispersion.