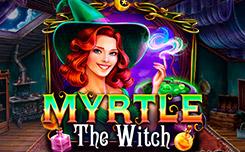 The developer of Red Rake, released the slot Myrtle the Witch, with which you can transfer to a powerful witch named Myrtle. The slot has 5 reels and 40 paylines, free spins, bonus levels.

The flasks with potions, the black cat, the owl, the black raven – the faithful helpers of the witch in her magical exercises – became the base symbols.

Wild – a smoky pot – brings payouts and substitutes for other symbols;

Scatter – the full moon brings payouts on the increased multipliers, the size of which depends on the number of such symbols on the screen: three scatters – x1, four – x5, five – x20;

Bonus – the laughing witch activates the bonus round. It is necessary to collect at least three such images. The player is transferred to the laboratory, where the witch cooks his potions.

On the shelf are different jars, among which you must choose several ingredients at random. Under the shelves are potions recipes, where the concurrent ingredients are noted.

The number of attempts is equal to the number of Bonus symbols. In addition, the player receives a fixed number of free spins: three characters – 8, four – 10, five – 12. If the ingredients selected on the shelf match the recipe, the player can get additional free spins, increased multipliers, coins, and additional attempts to search .

During free spins, the witch can randomly transform any images on the reels into a symbol of the spellbook that has Wild properties.

Myrtle the witch is a bright graphics, an exciting gameplay with lots of prizes. The game will be appreciated by fans of non-boring slots with various functions.