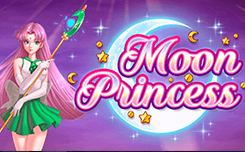 The company Play’N Go released a slot Moon Princess, which has unusual characteristics. There are no drums and lines here, but instead you will see a 5×5 screen with 25 pictures.

Three girls and four pendants of different shapes appear on the screen.

Wild (the moon), he creates combinations, and replaces other symbols in the chains.

The star power. It can begin in any back that did not bring a payout. The princess, who is at the drums, will use her magical ability:

Love – Turns one kind of character into another, bringing winnings.

Star – On the screen, additional wilds will appear.

The princess trinity – When forming combinations of three, four or five elements, a special scale is filled into one, two or three sections. When the level is full, all the princesses activate their abilities.