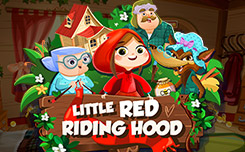 You probably heard a popular story about a little girl in a red cap who went into the depths of the forest with a basket for her sick grandmother.

The company Red Rake Gaming, decided to use this story to create its new slot, called Little Red Riding Hood.

The slot has five reels and 25 paylines. Among the symbols presented in the game you will see a red cap, a grandmother, a hunter, a wolf, as well as standard card denominations from 10 to A on wooden planks.

The game provides two options for wild symbols. The first multiplier is a basket with food, if there is such a symbol in the winning line in the amount of one – you increase your winnings by x2, if in combination there are 2 such symbols, the gain will increase by x3, and if you are lucky and you can catch three such symbol in the winning combination – your prize will increase by x4.

The second wilder is represented by the grandmother’s house, it replaces the simple symbols, for more frequent coincidence of winnings.

The symbols of the scatter are Little Red Riding Hood, three of these symbols anywhere on your drums run 10 free spins.