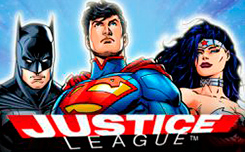 The structure of the Justice League slot turned out to be quite traditional and consists of 5 reels, 3 rows and 25 lines. In the machine, rates from 0.30 to 75 monetary units are allowed. Winners are considered only those cells of the reels, where they coincide from three or more identical symbols in the direction from left to right. The amount of payments is determined by the individual cost of the participating symbols and reaches a multiplication of x300.

To convey the atmosphere of heroic history, the developers added a background image of the city and pictures of the main characters, headed by Batman, Superman and Wonder Woman, to the Justice League.

The stacked structure explains the function of the Super Hero Power Up function, according to which vertical bands of superheroes can be distributed on drums, provided that there is at least one picture of this type on adjacent columns. Functions of a special direction are observed in Wild (replacement of others) and Scatter (launch of the bonus).

To launch the Attack on Metropolis bonus, a combination of 3 or more scatter is required, after which the game moves to the new location of the slot, and a draw of 10 free spins starts. During the bonus rotation period, all wild symbols fill the counter to improve the second part of the Super Hero Spins bonus. Free spins pass with fixed pictures of superheroes on 1 and 5 reels and random multiplication of wins by x2-x10.

The optional Gamble mode does not depend on any combinations and is available to players on a permanent basis after winning. The format of the bets here is different, since the inverted cards become the main element, you have to guess by the color or suit and get the x2 / x4 prizes.