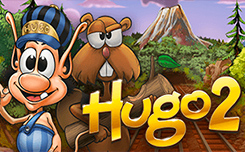 The company Play’n GO, in 2016, released the Hugo slot, the game liked many players, and the developers decided to release an updated second part.

Video slot Hugo 2, has five reels and 10 paylines. In the slot, there are ordinary symbols, wild, scatter, bonus and free spins. Among the symbols you will see coins, gold, diamonds and other symbols associated with the story of the main character.

Wild (Kuzya), creates winning combinations and replaces the missing pictures in the chains.

Scatter (beaver) appears in the first, third and fifth columns. It starts free spins when the three icons are on the reels.

Troll Race Free Spins – Initially, the user is given ten free spins, but they can be extended. During the prize spins, coins appear on the reels, providing additional wilds and multipliers. The maximum number of free spins is limited to twenty. After, there is a chance to get into the bonus round.

Skull Cavern Bonus – The troll will be in the cave of the evil witch, where he will search for the treasure. You need to click the mouse on different subjects. Successful attempts bring payouts. Unsuccessful choices mean minus one life. The round ends when all lives are expended.

The continuation of the history of Hugo turned out to be no worse than the popular first part. Moreover, the new device is spectacular and versatile. You will like interesting bonuses, fascinating free spin and special symbols.