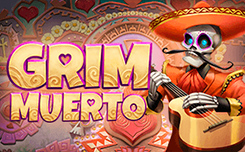 Following the studio Thunderkick, well-known software developer Play’n GO presented its version of a slot machine Grim Muerto, dedicated to the Day of the Dead that is held annually in Mexico November 1 and 2. Like in Halloween, in that day people arrange large-scale carnivals and treat each other with sweets with images of skulls. Another important tradition of Day of the Dead is building private altars with favorite food and subjects of dead loved ones.

Bright storyline of the trend is perfectly complemented with a wide list of features that will be available to participants as part of bonuses and prize function.

Slot machine Grim Muerto received standard set of components, which includes 5 speakers located in the scheme 5×3, where winning combinations will be forming in 20 constantly active directions. Placing bets in the game begins for users with the choice of total amount of payment of spin in the range of 0.20 to 100 monetary units.

After stopping the reels on the playing field of online slot there can appear a combination of three or more identical values in the direction from left to right with the cells of the first column.

Size of earned winnings is determined according to the indicator of individual cost of participating symbols with a maximum value up to x1000.

Choosing a strategy for the game, it will be useful for participants to learn the indicator of the theoretical return of total payments on long distances (RTP), its data appear at the level of 96.51%.