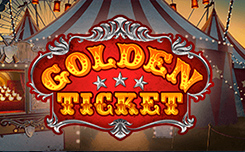 Perhaps one of the best places of entertainment and fun for children is the circus. Just imagine what the child feels when jugglers are charming with their abilities, under the big top there are flying acrobats and clowns are delighting everybody, making the atmosphere around them very funny.

Not only children, but even the adults and experienced people are astonished by tricks, skills and diversity of images of the circus workers. Those who had never visited a circus, lost so much in their life.

Although the manufacturer Play’n Go of gaming software developed gaming machine on this subject. Slot was named «Golden Ticket Slot» and tells the participants about how the circus looks and its protagonists. The user can watch performance of fearless acrobats, illusionists, animal trainers and clowns who are willing not only to reveal the secrets of their work, but also to enrich the participant.

Description of the design

The playing field is represented as a circus arena, where the main character is the trainer who tames the reels and making them profitable. Bright colors and illuminating elements predominate in the graphics of the slot that allows a player to come very close to real circus programs. In addition, in the game there is a playful melody, which encourages the main character and a player.

It is necessary to note the bonus round that operates in the gaming machine. Its activation is possible only when in the playing field the winning symbols will disappear from the column, where the BONUS sign is hidden. These words can appear either in the single column or in several ones. The player also should know that the “wild” symbol in the game does not disappear and continues to help to form bigger number of winning combinations.