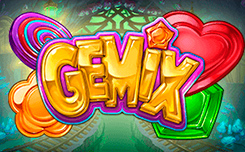 The slot called «Gemix Slot» is considered to be unusual in terms of theme and game features. There the participant will get acquainted with fairy characters and move to their fantastic kingdom. Since the user will take a few steps during the game, he will be in variety of fairytale castles, ruled by wizards.

The game takes place on the background of one of the wizard homes. By the way, this background changes according to the change of the game round. Graphics is made only in bright colors and it makes it memorable. In addition, it is necessary to note the presence of animations in game and musical accompaniment, which complement the overall style of gameplay.

Lamp, sweet and book: three “wild” symbols, which operate in the gaming world 1, 2 and 3. They all have the same function – replace variety of images and allows you to create the most profitable combinations. These symbols appear automatically, and each of them has a certain amount, in which it falls on the game field.

In addition to the winnings for the preparation of unusual in its size game combinations, the user has an opportunity to activate a number of additional functions in the machine. There 4 such options and they are opened only when the user collects a large number of winning combinations. Thus, the participant can use «Nova Blast», that will allow him to detonate several standing rows of crystals and to get prize for that.

The second function is «Crystal Warp». In this case, one automatically selected symbol will replace the figures standing next, then the winning combinations will be formed and the user will receive a prize. Next special option of the game is called «Light Beam» and with the help of it two lines on the game field will be covered by the same symbols, which will help to form winning combinations. «Chain Lightning» – is the last function, which is able to turn 20 symbols into one and bring good winning to the participant.