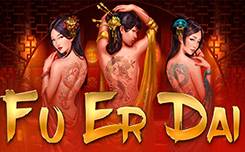 The slot Fu Er Dai, equipped with five reels and has 10 paylines. The game has simple and special characters, in the form of stretching wilds, free spins, as well as respin.

Among the symbols you will find: a secured guy, a phone, car keys, money and cards, as well as names of playing cards from 10 to A.

Wild Dragon (medallion with dragon), appears quite often, on middle drums. After appearing, he turns into one of the girls with a tattoo on his back, filling the entire column, and then, starts re spin.

Re-Spins – One wilds, takes up a whole column, after which, re spin is launched. If additional Wild does not appear, the available wild on the screen simply helps to make combinations.

Win Spins – From two columns filled with Wild symbols, start at least five free-spins. In each of them, payments are guaranteed. Wilds stay in place, up to three spins in a row. Rotations can be renewed with new Wild symbols, but no more than twenty rounds in a row.

Fu Er Dai is a colorful model with cool design and fascinating gameplay. Wilds, which fill whole columns, free respins, a series of bonus spins – you will like these features.