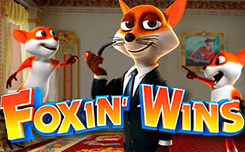 Two years ago, NextGen Gaming pleased fans of online games with a model called Foxin ‘Wins, whose main characters were members of a rich family of foxes.

And now there was a slot Foxin ‘Wins Again, in which you will meet with the same characters. But now you will see them not in a family mansion, but on your own luxury yacht.

Foxin ‘Wins Again has five reels and 50 paylines. On the drums of the slot you will meet: a fox, a yacht, cocktails, a compass and others.

Special elements are Wild (fox at the helm of the yacht) and Scatter (ship bell).

Wild goes in strips, forms combinations on its own and replaces simple symbols to compose a winning combination.

Scatter, at least three such symbols, run free spin. All payments will be doubled, and more Wild appears on the screen. At the end of the round you will be able to pick up the overall winnings or else reset it and run free spins again under the same conditions. The second chance is offered once.