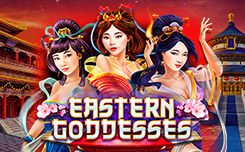 Developers of Red Rake used Chinese themes when creating a new video slot Eastern Goddesses. The heroines of the slot machine are the goddesses, who patronize the forces of nature.

The slot has a 5×3 structure with 30 bet lines executed in colorful graphics, equipped with unique symbols, bonus functions, as well as repeated and free spins.

Wild, can bring winnings and replace other symbols;

Scatter – a triangle, launches a free spin. The image is only present on the three middle drums.

Each of the goddesses has its own magic.

When the second reel appears full image of the goddess of fire, the function The Fire Multiplier is launched. The Goddess randomly assigns an additional multiplier to the available combination.

The full image of the water goddess on the third coil activates the function of The Waterfall, adding wild symbols to random cells.

The appearance of the full symbol of the goddess of wind on the fourth reel launches the function of The Wind Fortune. On the fifth column there appears a vertical column filled with wild symbols, and the re-spins start. With each launch, the Wild column moves to the left until it reaches the first reel.