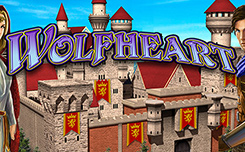 “Wolf’Heart” is a slot with three screens. On the first screen, there are two drums, and on each of them you can see six pictures at once. The other two screens are on the right, one on top of the other. They have three columns with three pictures in each.

The slot has different kinds of simple and special characters, free spins with advanced features, additional multipliers and other functions.

Among the symbols, you can meet: a guy and a girl in medieval clothes, an image of the city, a werewolf, a dagger, and others. Symbols go in strips, which allows them to take up whole columns.

Wild (the main character) is paid for himself and helps to form combinations from other pictures, except for the scatterers.

The prize round has the form of free spins. Their number is determined by the sum of the Scatter symbols on the screen. From three to eight scatterers give from eight to sixty free spins.

The main characters during the prize rounds turn into werewolves, which are used as Wild and replace other pictures, doubling the payouts.