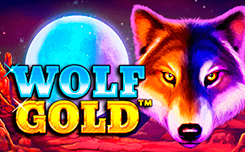 The Wolf gold slot machine is equipped with 5 reels and has 25 paylines. In addition to conventional images, the slot has images with special features and free spins.

Wild (wolf) goes long strips, often occupying a whole column and can fill the entire screen, which will lead to a huge win. It also replaces simple symbols to form advantageous combinations. In free spins, it has additional features.

Scatter (sunset) with the appearance of at least three such symbols, start 5 free spin. Three middle drums are combined into a single “giant” wild that fills all nine central cells on the screen.

Money respin – starts, if in any cells there are at least six bonus symbols with the image of different sums. All prize symbols remain in place, and other elements change to new ones as a result of repeated spins. Initially there are three, and the appearance of additional moons updates the counter to three. When the round is completed, all the numbers on the bonus pictures are summed up.