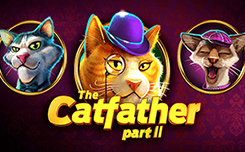 The company Pragmatic Play released a release for the continuation of one of its most popular slot machines and this time it became a popular slot on the cat theme The Catfather. The new game is called The Catfather Part 2, the new slot slightly changed some characters and additional bonus features were added. By the way, the new slot has changed the number of gaming lines, which have been increased to 30.

Cheap symbols are standard symbols J, Q, K, A, which will bring from 3 to 50 coins. The most expensive symbol is wild, executed in the form of two black kittens, which hid in a cardboard box. Five such identical symbols will bring in from 5,000 game coins. The skatter symbol looks like a golden suitcase and launches a free back.

Random wild, runs, both in the main and in the free spin. At any point in the game, a cardboard box with two black cats appears on the drum, one of which jumps out and tears off the green background, turning the entire playing drum into a wild symbol.

Bonus game free spin starts when at least three symbols fall out a scatter (golden suitcase), after which you will have ten (or more) free spins with a constantly active function wild wild, where for every free spin on the screen will appear at least one full wild drum , increasing your chances of a huge win several times.