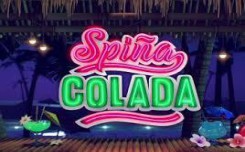 Spiña colada – a new slot for fruit, from the company yggdrasil gaming. The game has five reels and 25 winning lines with a minimum bet of 0.25 euros. The slot is equipped with a lot of bonus features. Firstly, it is a constant active re-rotation function, when you get a winning combination, the re-rotation is activated, so it will continue until the same symbols appear on the screen, if you fill all five reels, the multiplier will get the winning combination x5. Even in the main game, four additional bonuses can be launched, they can activate free spins, additional multipliers, guaranteed wins and random wild ones.

Externally, slot spiña colada is very interesting, the game screen is located on the background of the bar, which is located on the shore of a tropical island. On the drums there are symbols of various fruits: watermelons, pineapples, kiwi, oranges and strawberries, as well as three delicious cocktails. The logo of the slot is a wild symbol and can replace any symbol of the slot.

The re-rotation function is started if you get at least three identical symbols on the same game line, the symbols freeze and stay in place, a re-match will result in a repetition. In addition, you can get an additional multiplier, it all depends on how many reels you fill, two filled drums will bring a multiplier x2, three multiplier drums x3 and so on.

In addition, in the base game there are four randomly launched functions.

Second chance function – one or more characters will be moved so that you get the best combination.

Win x3 Warranty function – you will rotate the reels until the first three reels are full, and you get a guaranteed multiplier of x3.

Full Line – this function is most beneficial, after you get five identical symbols, a bonus game with four free spins and a guaranteed multiplier is activated.

For example, if you run a guaranteed win x3 four times, you will play with a constant multiplier of x3, in addition, if you fill two reels, you will have a sixfold multiplier, three – nine times, four – twelve and five reels will bring you a fifteenfold multiplier.