Nitro Circus – a slot with the theme of crazy stunts and a bunch of adrenaline from the company Yggdrasil.

Yggdrasil gaming has become one of the first companies that entered into a contract with a popular show on MTV, Nitro Circus Live. The design of the nitro circus slot has a sporty style, with cool special effects. The game screen is located on the background of a huge arena, for performances of young people who are ready to arrange a real show and show their amazing tricks. In the new game there are special bonus features, where each player can activate additional cash prizes, activate the free spin function, or launch the Nitroblast mini function. 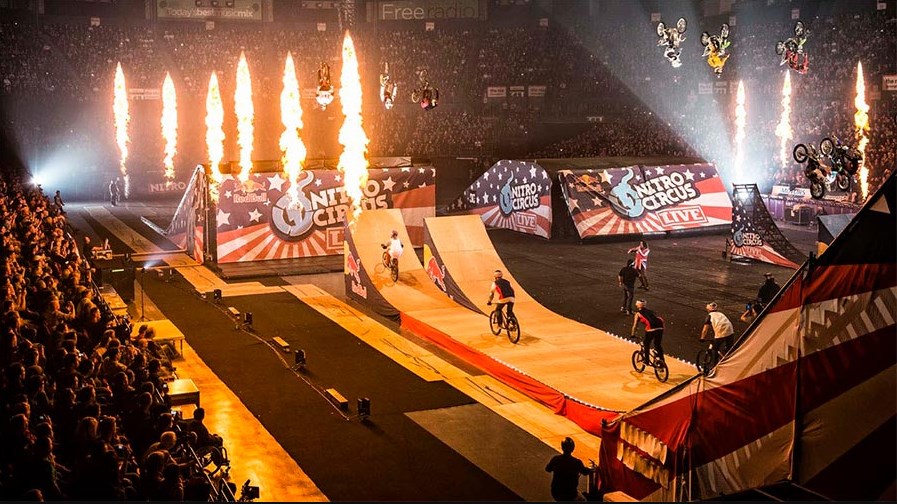 On the technical side, the nitro Circus slot has five reels and 25 paylines with a minimum bet of 0.25 euros per spin. On the drums you will see four athletes, as well as their sports paraphernalia in the form of multi-colored protective helmets. Wild symbol is a black bomb with a lightning bolt, during the main game it complements the winning combinations, during free spins, it can activate additional features.

Nitro Jump – is activated when the word NITRO is formed on five reels. In this mode, the characters will perform various tricks on a different technique. The function consists of two ordinary and one final jump. For each completed trick, the judges will be awarded a cash bonus, and you can get additional prizes by catching special characters when doing the trick. Also, yggdrasil stated that during each bonus game the player can choose the risk level independently, that is, you can choose maximum possible gain.

Nitroblast – is activated during the main game, when Nitro Bombs symbols appear on the screen, in this mode you will choose secret cash prizes:

Free spins – starts when three Nitro Bonus symbols appear and can have various options, you can get from 10 to 30 free with various additional functions, among which you will see:

Nitro Circus is the most awaited slot of yggdrasil, thanks to the unique theme and excellent set of bonus features, the slot will definitely please all players. The launch of the slot is scheduled for November 15, 2018.