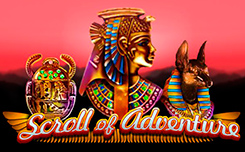 Scroll of adventure – equipped with five reels and has 5 paylines. Among the functions that are present in the game, there are, simple and special characters, as well as free spins.

On the drums, among the symbols, you can find images that are related to the history of Egypt, as well as the main character, and the standard name of the cards from J to A.

Special functions are performed by an element combining the capabilities of Wild and Scatter. It’s a scroll. He, if necessary, replaces other pictures, and also launches ten prize-winning spins, with the appearance of at least three such symbols. In them, a randomly selected picture appears on the entire column when it appears on the reels.

The slot is capable of capturing you, the possibilities of a special symbol and a round of prize-winning spins. Payouts for combinations are also quite high, which can not but rejoice.