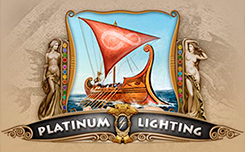 Platinum Lightning – a new slot from SoftSwiss, which deals not only with the creation of video slots, but also provides original solutions for creating online casinos.

The slot machine is based on the myths and legends of ancient Greece, where you will meet with mythical creatures, such as: hydra, minotaur, and also with the legendary Hercules, who fearlessly fights these horrific monsters. The game is accompanied by thematic design in the style of a forgotten Greece, and the corresponding soundtrack takes you thousands of years back.

The slot has 25 paylines and 5 reels. In order to start the bonus round, you need to catch 2 minotaurs on the first and fifth reels. Then you get 10 free spins, where the first and fifth drum will be completely filled with Wild symbols, which will significantly increase the chances of getting the highest winning combination.

The game also features a Scatter symbol that can bring up to 777 game coins, where the payout starts when three or more symbols appear on any of the game reels. The most profitable combination that can bring a huge jackpot of 8888 credits is the five Wild symbols that appear on one of the game lines.