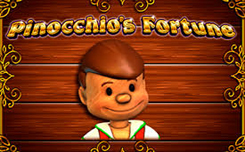 Pinocchio’s Fortune, has five reels and 30 paylines. The game has several bonus rounds, prize backs, special characters and some other options.

Wild (Pinocchio on ropes), he is able not only to form combinations himself, but also helps to compose them from other pictures (except bonus ones), replacing the missing elements in the chains. To do this, he, of course, must fall out in a suitable position.

Bonus (Blue Fairy) appears only on three middle drums. When three such symbols appear, the prize round begins

Find Gepetto (“Find Gepetto”), you will play a step-by-step game, moving Pinocchio on a special board. For each move, you will receive rewards. The further you manage to climb, the larger will be the final prize.

Bonus (Pinocchio). Three, four or five of these pictures will launch 8, 12 or 16 free spins. During these spins, Pinocchio images appearing on the reels will be considered. They can be up to fifteen. Upon completion of the free spins an additional screen with fifteen cells will open. You can open as many of them as Pinocchio you collect.

Also in each back you can become a member of the so-called Puppet Bonus. It starts when on the third, fourth and fifth reels there will be pictures, in the corners of which the Pinocchio doll on the ropes is depicted. You will need to choose one of the two boxes.

Pinocchio’s Fortune is a slot with cool features, high-quality graphics, and a user-friendly interface.