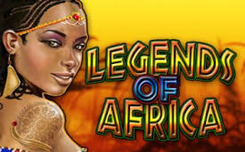 Legends of Africa, has five reels and 30 paylines.

All the pictures that appear on the screen of the “Legends of Africa” ​​slot, correspond to the theme of the game. You will see animals, a local resident in a national costume, and others. The game has many interesting features.

Wild, appears in three middle columns. Because of this, it does not pay for itself, but if necessary replaces other images, except for the scatterers.

Bonus, there is only on the second, third and fourth drums. Falling immediately in three columns, he brings a payment of one common bet, after which he starts a round of free-spins.

Any way blast, in any back, if one character completely fills the first and fifth column, these pictures start to operate on the Any Way system. This means that they are paid regardless of active lines.

Mask picking bonus – a round is a free spin, before which you need to choose one of three masks. They can hide 10 spins with coefficients X3, 12 spins with guaranteed identical pictures, on the first drum or 15 spins with additional Wild symbols.

Mystery feature – On each drum there are “mysterious” cells, in which the symbols themselves can be changed to other elements.