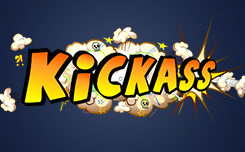 Developers 1X2 Gaming introduced a slot called Kickass. It has a rather unusual theme. The plot line is based on fascinating comics, in which the main character is a New York teenager named Dave.

The slot has 5 reels on them are 25 lines. In the game you will get acquainted with bright representatives of comics, hiding their face under the masks.

Wild – will replace any image or advantageously complement the combination.

Free Spins – an image with the same inscription, will launch up to 15 free rounds.

Scatter – will open access to the bonus level. You have to read as many pages of the comic. The more pages you read, the more you win.

The symbol of Multiplier is the shadow of the mysterious superman. It activates additional multipliers. As soon as this symbol appears on the reels, the next five rounds will bring a double win.

Thanks to a whole host of additional features, the Kickass slot machine has gained immense popularity among fans of gambling. In general, the slot brings a lot of positive emotions, and it is interesting not only for comic book lovers.