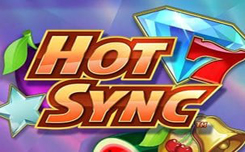 Slot Hot Sync, has five reels and 20 paylines. On the game screen, you can meet – diamonds, sevens, asterisks, various fruits and berries. They can fall out in long vertical strips in columns.

Wild, forms combinations on its own and replaces other symbols, to obtain an advantageous combination.

Hot Sync Respins – During start-up, the reels on which Hot Sync Wild symbols have appeared are synchronized. Rotations can be increased when a wild symbol appears.

Free Spins – Eight free spins start. Here, the above described respins can be started, which take place on even more favorable conditions. On drums, which are used in this way, until the end of the round, only the most valuable pictures fall out.