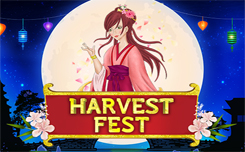 Players who love slots associated with the culture of the country of China, the company Booming Games, prepared a surprise, releasing a slot called Harvest Fest.

In this game, there are 5 reels and 25 lines for forming combinations. Among the symbols presented in the Harvest Fest, you will find images in the form of a guy and a girl, a rabbit, a dragon mask, Chinese lanterns and others.

Wild, forms combinations that are calculated by the increased coefficients, and also replaces the simple symbols for the formation of winning lines.

Scatter, payable when appearing anywhere on the screen. Three, four or five such symbols start ten free spins. The bet size and the number of lines remain unchanged until the end of the free spins.

The video slot does not have unique gameplay features, but offers quite attractive conditions. There are many combinations, and often they are paid for by high coefficients.