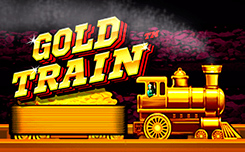 The slot machine Gold Train, equipped with three drums and 3 lines. In the slot there are simple pictures, scatters, wilds, and also a bonus game.

One, two and three strips of BAR appear on the game screen, as well as red sevens, a conductor’s cap, flags and a bell.

Wild (locomotive) falls on all the columns and can itself form the winning chains. They are paid according to the maximum coefficients. It is also capable of replacing simple symbols.

Scatter (Silver Ticket), activates the Progressive Bonus Feature. This round is launched on the additional screen, where a train appears, which drags the trailers with gold. They will bring you different payments. Also, they can have gold tickets, increasing the train, for 4 – 10 trailers.

In fact, with traditional game machines, this model is related only by the number of drums. If we consider a set of available gameplay options, it is more like the modern video slots, because here are available Wilds, Scatterers and bonus spins.