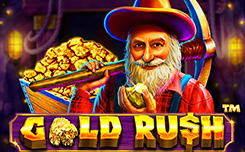 Slot machines about the times of gold rush in the US produced many software developers for online casinos. Moreover, several well-known manufacturers, including NetEnt, Habanero and Playson, previously presented models called Gold Rush. Developers from Pragmatic Play also did not hesitate to think about how to name their game. So meet another “Gold Rush”.

Gold Rush is a video slot with five reels and twenty five lines. Symbols on the screen are arranged in three rows.

The hero of the video device Gold Rush is a gray-haired miner who mines gold in the depths of the earth. On the reels you will see characters, instruments, as well as letters and numbers, indicating cards from 10 to A.

Scatter, falls on the second, third and fourth drums. Three scatters run ten free spins. During the round you will collect gold nuggets. A certain number of ingots takes you to the next level, and on the drums appears more images of the miner. It creates combinations with the largest coefficients.

Pleasant design, convenient interface, a large number of winning chains, interesting features of special characters and exciting free spins with several levels and bonuses – these are the strengths of the model under discussion.