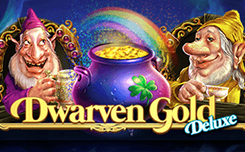 Not so long ago, a pragmatic game released a game called dwarven gold. The slot was popular with many users, and the developers decided to update it by creating a Dwarven gold deluxe slot.

The video slot is equipped with 5 reels and has 25 paylines. Among the symbols on the drums you will find four gnomes, a treasure box and names of playing cards. Also you will see special characters:

Wild (pot with coins) is not paid for itself, but it can replace ordinary symbols to make winning combinations.

Scatter (butterfly), appears on three middle drums and launches seven prize-winning spins. Before the start of each rotation, two wild ones are added to the 2nd, 3rd and 4th reels. During free spins, three scatterers on the screen give a win of twenty common bets.

In the updated game there is better graphics, interesting animation, free spins with extra wild ones.